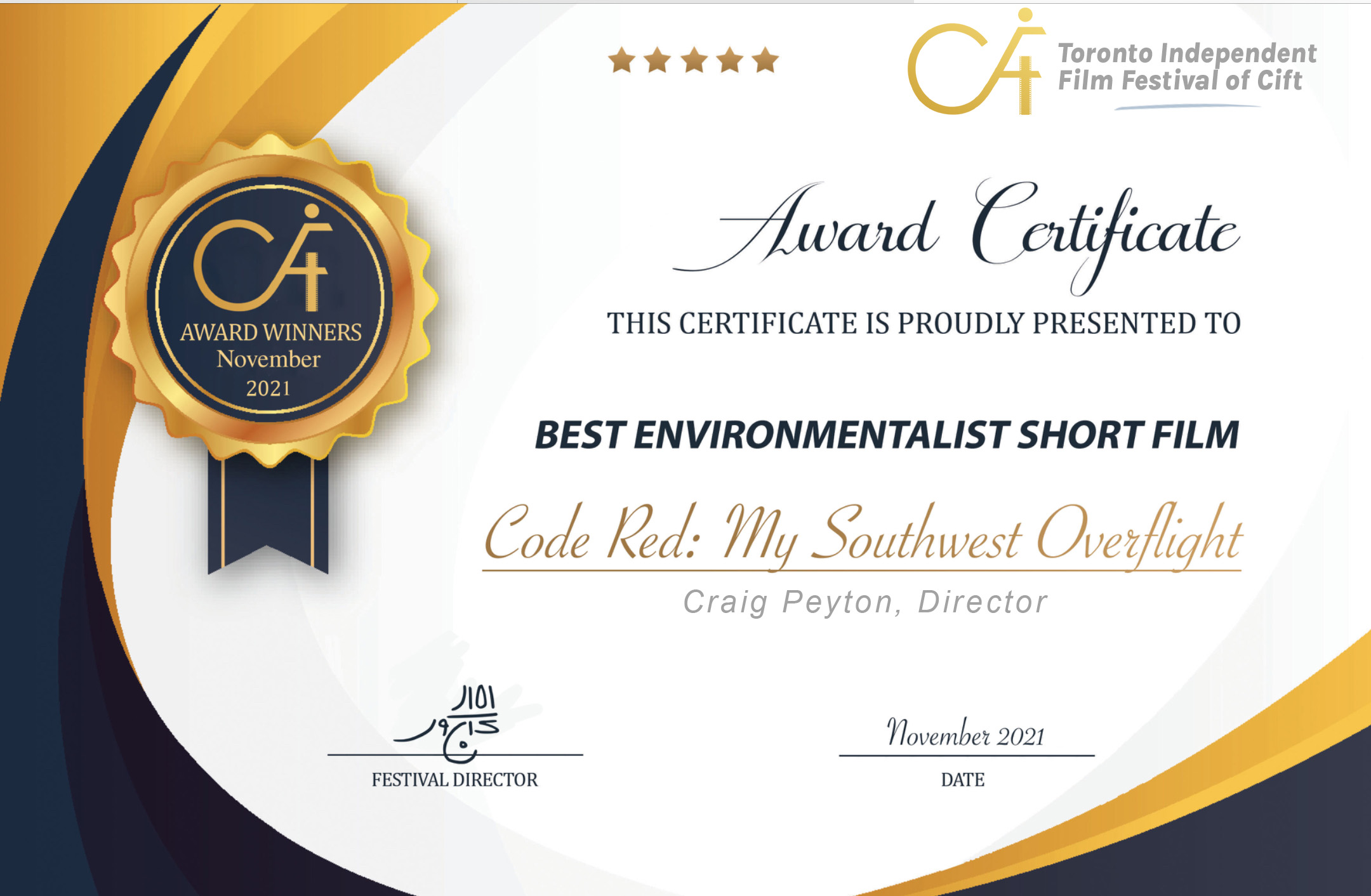 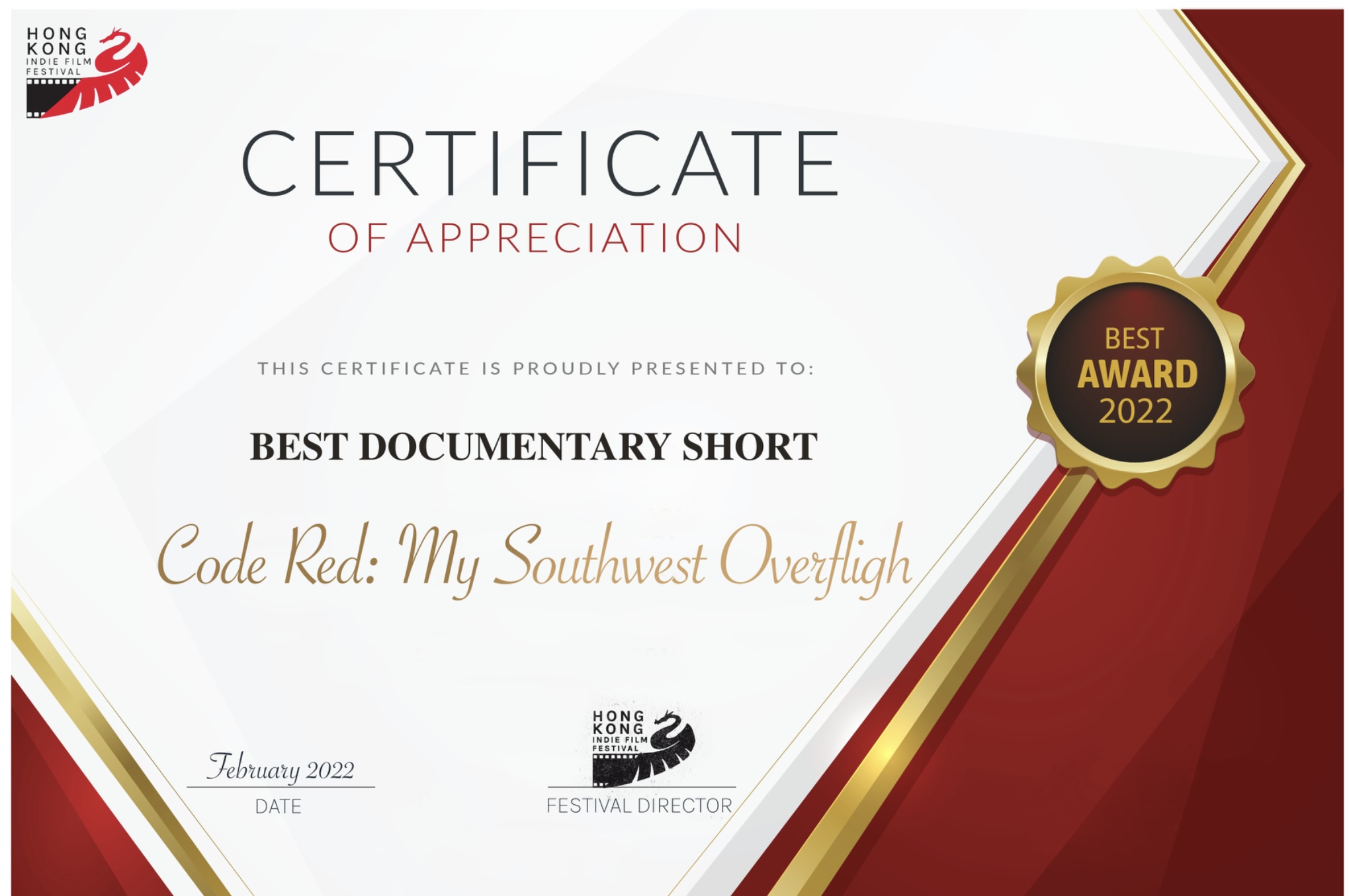 ‘Code Red: My Southwest Overflight’ is an aerial photography film directed by Craig Peyton showcased at the 2021 Toronto International Film Festival of Cift (TIFFC) and has also been officially selected in several other film festivals, including a category for climate change.  His film became a semi-finalist in the Advertising Coverage category at TIFFC.  The film uses a 360-degree 5K VR wing camera to film himself flying his small plane to the four corners of the Southwest United States in Arizona and Utah.

Craig Peyton is a musician and transitioned himself to film production. He has contributed to many Hollywood film productions like “Along Came Polly” with his aerial photography.  Craig is a 6,000-hour rated pilot who founded “EarthFlight.com” so he can combine his passions for flying, music, and film production, which led to this project.  In addition, the idea of this particular film came about due to the challenges of flying in several extreme climate conditions of heat and fire in Southwest US has given him a reason to film a particular topic he can focus on and share his experience during his flight.

Craig’s inspiration came from flying his personal plane across New York to Los Angeles during the summer of 2021, where he witnessed drought, forest fires, and heat waves as high as 110°F that he discovered in several areas across the land.  His passion gave him a purpose to create some awareness of the ever-changing climate and voicing his thoughts and concerns by educating the viewers with what he can show from his 360-degree camera.

His approach to making this film relies on his flight with the 360-camera mounted on the wing of his plane.  He produced his own music and used it as the backdrop for the film as the viewers enjoy the aerial views of his flight.  His own commentary is sprinkled throughout the film to help describe what he is showing during his flight as well as sharing some heart-filled advice on what he has learned in his life.  Think of this as an extended artistic music video and documentary combined as one, sharing his observations of the world, experiences in his life, flight knowledge, and technical aspects of his aerial filmmaking.

All the commentary from Craig was clearly straight from the heart, whether or not if it was scripted.  His views are well articulated from his life experience to provide the authenticity and empathy he exudes from his adventures.  Some of the amazing sights he filmed included the Red Rocks and Lake Powell in Arizona and the Monument Valley, Navajo Tribal Park in Utah.

Craig’s philosophy to aerial photography is “that it is better to capture ugly than to capture beautiful”.  In a way it sounds like a complete opposite idea of what one may think about capturing aerial photography, it is likely an effective approach to filming.  This likely means that it gives him the opportunity to relax any rules and fundamentals of getting the “perfect shot” and just let the 360-degree camera do the work.  This allows raw unedited scenes to extend a little longer to increase the immersion of his flight experience.  And not that many aerial photographers have this sort of opportunity to do something as unique as what Craig had the fortunate chance to film. This also gave him the opportunity to showcase the neat “tiny planet” effects that the 360-camera is capable of doing.

If anyone was to do a film like this, Craig was the right person to take this initiative.  He has the flight experience and talent to pull off something that is captivating and different for viewers to enjoy and learn at the same time. His humble and wise voice-over commentary is a great blend to his filmmaking, which speaks volumes to how much of a passion project this was for him.  And more importantly, he did this with good intentions of creating awareness for climate change.  His closing statement for this documentary is that “it’s always the best time to do the right thing and protect our little blue planet. Thanks for being on board”. If you would like to see more of Craig’s work, be sure to visit his website http://www.earchflight.com.

The Craig Peyton Band has awakened as if they were in suspended animation. After an absence of 34 years, the jazz fusion group simply picks up where they left off, delivering a breezy, consistently engaging sound on their reunion album, the aptly titled Homecoming.

For a band that played their last show in 1982, there’s no rust to be found; the group jams through 10 tracks with bold self-confidence and sharp instrumentation. To pigeonhole the band as fusion doesn’t acknowledge Homecoming‘s crossover appeal. Peyton and crew actually cross the borders between prog, art rock, and jazz, sometimes within the same track, impressively enough.

“Walk On By” is a lovely, enigmatic gem, actually recalling Roxy Music’s 1982 swan song Avalon. John Putnam’s atmospheric riffs are seemingly haunted by Phil Manzanera’s lush, shimmering feel, and it becomes more dreamy as the track progresses. Peyton’s electric vibes are enchanting, lighting up the melodies. The mood-spinning cut is what headphones are made for; it is pure bliss.

The title cut is equally pretty. Those dismissing jazz fusion as cold and detached will have a swift change in perspective upon hearing this slice of heaven. Again, Putnam’s guitar is luminescent with Peyton’s vibes capturing the whispers of stars. Marcelino Thompson’s throbbing bass beats like a human heart as the group is aiming for spiritual transcendence here. “It Could Be Like This” is also particularly relaxing and hypnotic.

The Craig Peyton Groupstarted out in the late ’70s, bound by their mutual love of Miles Davis, Frank Zappa, Jeff Beck, and Jimi Hendrix. After having Peyton play on his hit “Vertigo/Relight My Fire, ” Dan Hartman gave the band a full month’s access to his recording studio. The CPG amassed a devoted following up until their final show in 1979. That wasn’t truly the end, however, as the CPG released the eternally cool Electric Vibes album a year later. After decades of collective silence, the CPG rose from the ashes in 2014 and started to jam like old times.

The fittingly titled reunion album Homecoming has the CPG proudly building from where they left off in the late ’70s. It is an intoxicating mix of jazz, rock, and funk. Drummer/percussionist Ray Marchica, guitarist John Putnam, bassist Marcelino Thompson, and vibraphonist Peyton display no evidence of dust, no lingering cobwebs; the record is driven with youthful exuberance. Tracks “Impulse Control” showcases the much-missed magic of the seminal zeitgeist that is the ’70s. “Pensive,” on the other hand,  starts off with an ’80s cinematic swoon then segues into compelling jazz fusion à la Hiroshima. “Nebadon” is reminiscent of Steve Winwood, David Sylvian, and Pat Metheny. Echoes of Herbie Hancock’s Man-Childcould be heard on the album as well.

Without realizing it, the CPG have opened a wormhole back to the ’70s and ’80s — not just to their past but when jazz fusion was at its finest.

In 1978, the debut album of Ray Marchica (drums and percussion), John Putnam (guitar), Marcelino Thompson (bass) and last but not least Electric Vibes Streichler Craig Peyton aka the Craig Peyton Group, the new business ran after Decades of isolation 2014 and again came together and finally in this wonderful new jazz fusion album between new Age, Latin, groove and soul structures called “Homecoming” culminates – gorgeous and a not entirely impartial.

“It’s no coincidence there’s an old propeller airplane on the cover of the new Craig Peyton Group album… This will take you on quite a journey, true old-school sound that still soars… the title track will leave you Breathless”_____________________From Kate J. Weiner: I wasn’t really sure what I was going to be hearing when I inserted the disc. But boy, what a pleasure. Each member of your group is a really good musician. I got very excited. You’re tight and your tunes are layered and always interesting to follow._______________________Craig………what a fantastic piece…and truly as soon as track 4, I  went to my CD player to see what it was!   Awww…this CD is my new music for life.ps I also bought your book from your site for kindle…

2 Replies to “Reviews and PR”